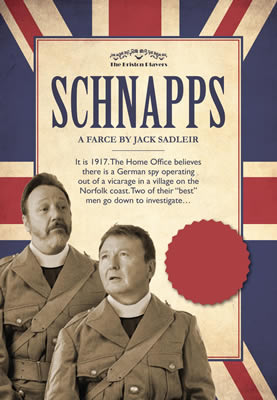 It is 1917. The Home Office believes there is a German spy operating out of a vicarage in a village on the Norfolk coast. Two of their "best" men go down to investigate…

The Briston Players presented Schnapps, a farce by the celebrated Suffolk Playwright Jack Sadleir. Building on a successful production of Sadleir’s comedy thriller Revenge en Suite in 2014, The Briston Players were delighted to be able to stage another of his plays.

With standout performances by a mismatched pair of undercover Home Office officials, played by Tim Travers and Glyn Sloman, and a stellar supporting cast, audiences are in line for a hilarious – and often quite bizarre – story!

Director Valerie Pinkham said "It has been a joy to see this farce take shape. When I first read the script, I thought it was witty, but it has been brilliant to witness the characters being brought to life. The Briston Players always put so much energy into their shows, and this one is no exception. I can’t wait for opening night to share this play with our audiences!"