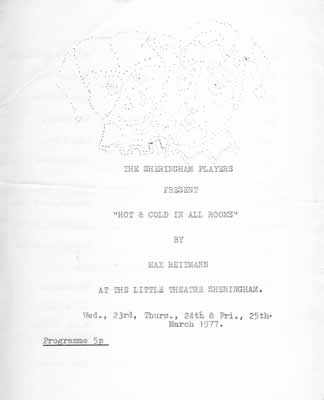 Plenty to chuckle about

A well-rehearsed team made a fine job of presenting Max Reitmann's comedy "Hot And Cold In All Rooms" at Sheringham Little Theatre last week.

The Sheringham Players kept the chuckles going throughout the play, acting out the complicated love affairs of the residents of a Kensington apartment house.

Malcolm Hambling did well as the father-confessor Pop, helping others with their problems before finally marrying landlady Alice Danvers (Edna Jenkins).

George Edwards plays the, effeminate Cecil who plays a mother to everyone and admits, when going to a wedding at the end of the play that he doesn't know whether he is the best man or the bridesmaid.

American Elmer (Ned Seago) is keen (as are all the men) on sexy Ingrid (Hilary Turner), but pairs up in the end with Sheila (Elizabeth Burke), who blossoms during the play from being dowdy to most attrac­tive, with a little help from dear Cecil.

Pat and Frank (Pauline Page and Colin Love) end up together and upper-class Bertie (Christopher Lea) lands the most coveted catch - Ingrid.

Odd one out is the eccentric Basil Clutterbuck, played by John Nash.

Fred Leonard did a commendable producing job, with his assistants Eve Turner, Sandy Roper and Dot Swift. Lighting and sound effects were by John Avery.