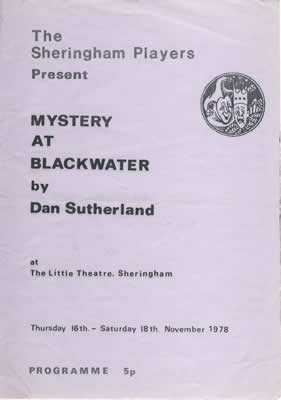 "Mystery at Blackwater", by Dan Sutherland, the latest production by Sheringharn Players, was staged at the Little Theatre last Thursday, Friday and Saturday.

Set in a country house in the late 19th century, the play is based on "The Woman in White," by Wilkie Collins.

The unpleasant Sir Percival (John Meikle) is bent on getting his hands on his new wife's money. Sweet, gentle Laura (Elizabeth Burke) is in love with her former drawing teacher, Walter Hartwright (Mike Crowe).

Her half-sister Marion (Peggy Francis), tries to protect Laura from her menacing husband but both women are tricked by Sir Percival and his Italian crony, Fosco (George Edwards). Laura "dies" mysteriously and the two "baddies" disappear.

Marion and Walter are left to solve the mystery of the secret connected with the Woman in White (Judy Nash).

The plot thickens cleverly in the final act and it was noticeable that the audience remained attentive throughout.

Fred Leonard's production could have been more convincing at times but generally the play was well acted and presented.