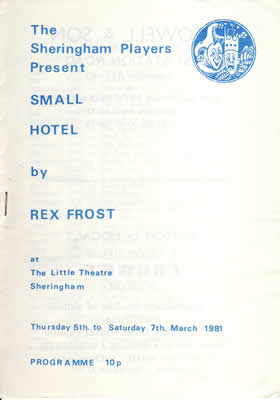 "Small Hotel", presented at the weekend by Sheringham Players, was a study in deviousness, but of a lighthearted kind.

The central character of the play, by Rex Frost, is a wily old waiter who, through a lifetime of observing the quirks of human nature, has learned how to manage people. Tom Jump, as the waiter, gave a masterly performance.

The play is a gentle comedy, set in the present, and many of the characters are the sort you might expect to find in a small country hotel.

There were traces of first-night nerves, but the Players soon settled into their parts and gave a thoroughly enjoyable performance.

The play was a good example of the fact that it is not essential to have lavish sets, scenes and costumes to make a production a success. The producer was John Meikle.