By Ray Cooney and John Chapman 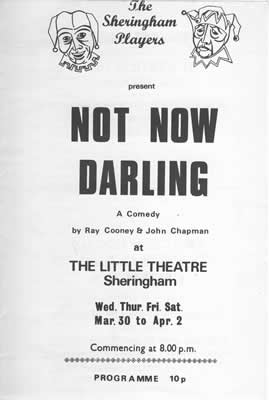 Putting on a well-known comedy in a small theatre can be a tricky business, but the Sheringham Players managed to delight the audience on Wednesday week.

Despite first-night nerves at the start, the Ray Cooney and John Chapman play "Not Now Darling" soon developed into its fast-mov­ing farcical intrigue.

The plot was an improba­ble concoction of wives, mistresses. lovers and fur coats set in a fashionable salon in the West End.

David Long played Gilbert Bodley - the man at the centre of the tangled web of deceit - and he gave a fine performance as the smooth-talking man of the world. IJohn Meikle, as Arnold Crouch, was his unwilling partner in crime.

Fiona Croxon as Bodley's somewhat greedy lover was suitably sultry - often adorned in no more than a fur coat - while Joyce Harvey, played by Sue Law­son, played her part as the wet secretary perfectly.

The rest of the cast, in particular Joan Spall, Mike Thame and Peggy Francis, all added their talents to pro­duce a well-finished and highly enjoyable play.

Credit should also go to producer Christopher Lea and to the team responsible for the set and lighting. The play ran until Saturday night.