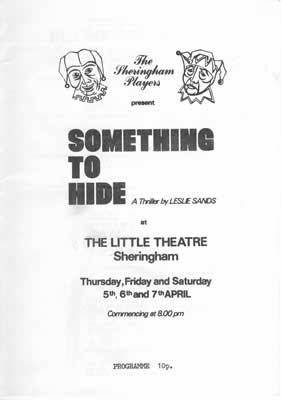 In ''Something to Hide,'' the British thriller by Leslie Sands, Police Inspector Davies is a sort of rumpled country Colombo. The perpetrators are Howard Holt, a writer of romance novels and his wife, Karen Holt, who owns the publishing company that publishes Howard's books.

The victim is Howard's pregnant mistress, Julie. The maid is an inquisitive sort, one who spends as much time looking into things as she does cleaning. A very nosy, obnoxious woman is the Holt's nearest neighbour.

Who is who is established at the beginning of this three-act play. The thrills come as the police investigator begins to peel away layers of circumstantial evidence as though he is preparing a plate of oranges. Who is actually doing what to whom is not as clear by the end of the first act as it was at the beginning.

Suspense continues to build, until by the end of the second act the only person who knows what is going on, and where it is happening, is the clever detective. Like a playful kitten batting around a captured field mouse, Inspector Davies takes his time before he makes his final pounce.