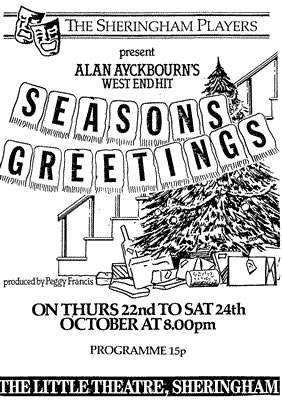 The strains of family life were laid bare in the Sheringham Players' production of Alan Ayckbourn's "Season's Greetings" at the Little Theatre last week.

While Ayckbourn is renowned for his comedy, there is no doubt in my mind that his genius is in using this difficult medium to give a revealing insight into personalities and the harsh realities of life.

Thus the Players were faced with a considerable challenge in exploring the depths of "Season's Greetings" - a bitter-sweet masterpiece.

There was no mistaking the knowing nods of Friday; night's audience as they recognised the tensions and the shortcomings of the family festive fun.

Individually, the Players portrayed the characters cleverly, but the performance fell short of a total success chiefly because the action was slow, particularly in the early scenes. Much of Ayckbourn's witty humour was lost because of this.

One of the best performances of the night came from Graham Blyth, who played an author named Clive who had almost accidently fallen among the family celebra­tions. His confrontation with the inebriated Phyllis, played by June Cooper, was one of the highlights of the night.

The touch of farce introduced when Clive's passions were aroused by Belinda (Janet Kelly) amid a veritable minefield of unopened Christmas presents also had the audience in stitches.

Neil Batchelor was perfect as Neville, the husband who had given up family life for his hobby.

Kees Van Woerkom was suitably dotty as the aging reactionary Uncle Harvey, but I did not feel he was quite mad enough to have shot at Clive in cold blood.

Playing the maiden aunt, Rachel, Pauline Page again showed that she had studied the character well. I felt she needed just a little more fire to gain the audience's sympathy as she agonised over whether she should give up her maidenhood to get her man.

Apart from his fine portrayal of the failed doctor, husband and entertainer, Bernard, Mike Thame deserves special credit for his puppetry.

Sandy Roper was the epitome of the pregnant, mother-of-two harassed wife, with Paul Clark, her husband, the ideal lad-about-town en route to becoming a middle-aged oaf.