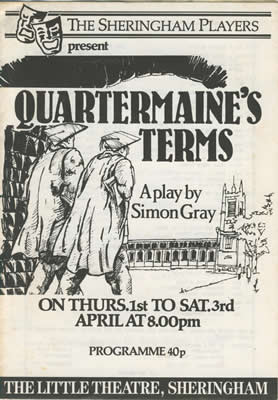 Set in the 1960s this tragicomic play features St. John Quartermaine, a pleasant and agreeable but hopeless teacher in an English Language school for foreigners.

Part of the furniture, he can often be found in the staff room and is treated as the resident agony uncle for his self-obsessed colleagues.

Mark has marriage trouble; Derek, from Hull, finds Cambridge initially unwelcoming; Eddie faces bereavement; Anita’s husband is a philanderer; Henry is trapped in a dysfunctional nuclear family and Melanie is similarly trapped caring for a mother who she despises.

An ultimately moving account of several years in the lives of seven teachers, this quintessentially British drama sees Quartermaine's position in the school threatened by a new school Principal...