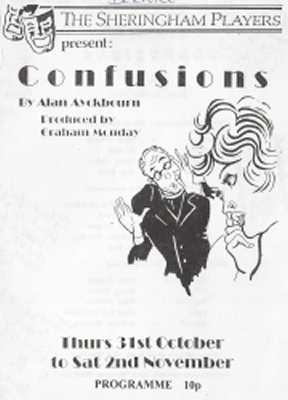 Three comic cameo glimpses of everyday life from the perceptive pen of Alan Ayckbourn make for an amusing evening from the Sheringham Players.

Drinking Companions sees a randy rep plying his patter on a pair of perfume promotion girls in a hotel bar. Mike O’Kane convinces as the increasingly-tipsy and flannelling flirt, whose advances are snubbed by belligerent Bernice (Jenny Eaton) while the more naïve Paula (Jo Kirk) finds it harder not to humour the sad character seen in hundreds of real hotel bars.

Between Mouthfuls cleverly visits two tables in a restaurant as they are tended by a long suffering waitr (Kees Van Woerkom). On one is an arrogant businessman (Ray Dent) and his myopic, but all-seeing suspicious wife (June Cooper). On the other is his underling (Graham Munday) and his wife (Jo Kirk) – two couples who find they have more in common than the setting.

The last of the humerous hat-trick is Gosforth’s Fete – a slightly more slapstick tea tent tryst where Mike O’Kane again impresses as the creator of a chaotic village event, and whose tangles with a delightfully-dippy schoolteacher (Jenny Eaton) are broadcast over the stuttering public address system.

An entertaining trio of rib-ticklers, only hampered by the Sheringham cast’s temporary church Hall venue whose lack of decent lighting and a bar could have been the handiwork of the hapless Gosforth.