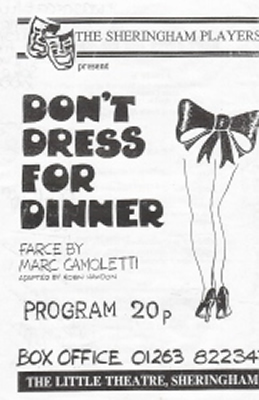 It's a normal sort of weekend. Jacqui's off to see her mother, leaving husband Bernard to fend for himself with a couple of frozen dinners, and then the phone rings. From that moment we are up to our funny bones in two hours of fully-fledged French farce.

There is confusion, the obligatory mistress or two, as many irate husbands, two girls called Susie - one who cooks and one who knows another way to a man's heart - and more hilarious confusion.

By the end of the first act, half the characters know what is going on but this only compounds the confusion of the others. The merry mayhem continues at a rollicking pace.

This is a very funny farce by Marc Camoletti. As Pyjamas for Six it was a smash hit for two years in Paris in the early Nineties followed by two more successful years in London in this adaptation by Robin Hawdon. It differs from traditional British farce in relying on humorous dialogue rather than a string of bumbling bishops and half-wit servants. But it lacks nothing in inventiveness, pace, exposed flesh and belly laughs.

Peggy Francis's production for Sheringham Players is well up to their usual standard, despite some first-night nerves. The excellent cast romped their way through to the happy end with brilliant performances by newcomer Sophie Morton and old-stager Graham Blyth.