By Ken Whitmore, adapted from the novel by Henry James 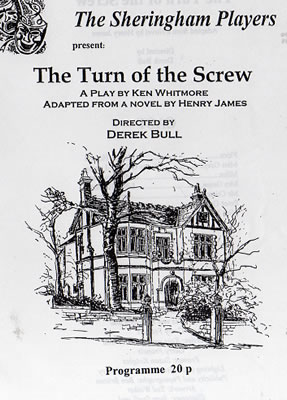 The Sheringham Players recently continued their Little Theatre record of well-chosen plays with Ken Whitmore's adaptation of this famous 'ghost' story by Henry James. It tells of a young governess placed, with no help except that of a kindly cook, in charge of two angelically behaved, beautiful and brainy children, aged 8 and 10, who are endangered, so she increasingly believes, by the devilish departed spirits of two depraved servants who once had control of them.

For a while the suspicion lingers that the parsonage-bred Miss Grey, performed with a conscientious earnest delicacy by Kirsty O'Leary-Leeson, is imagining these phantoms because of her own repressed sexuality, and that her little pupils are genuinely innocent rather than cleverly evasive, until the sparse clues accumulate sufficiently to resolve any ambiguity - and the girl is eventually removed from the premises after an apparently obscene outburst, and her brother is finally claimed, through sudden death, by the demonic Peter Quint.

Unlike the written story, and even the cinema, where haunting can be suggested in a more subtle and evanescent manner - and the fascinating film with Deborah Kerr and Peter Wyngarde is a `hard act to follow' - this production on stage is almost compelled to present the apparitions as visibly solid bodies; and this was handled skilfully by the Director Derek Bull, who played Quint himself with frightening credibility.

Eddie Townsend as the enigmatic Miles and Maddow Howell as Flora acted so thoughtfully that they might have stepped right out of the original pages; a promising sign for future theatrical achievement. Libby Henshaw as the down-to-earth cook Mrs. Grose, Peter Thrower and Val Bull gave good support.

Presumably lack of rehearsal time explains some noticeable prompting which, however, did not suspend the 'suspension of disbelief’ in a play that needs it more than most! Kees Van Woerkom and Gerry Francis designed the Bly House set most convincingly for an evening of gripping entertainment that left you wondering afterwards.