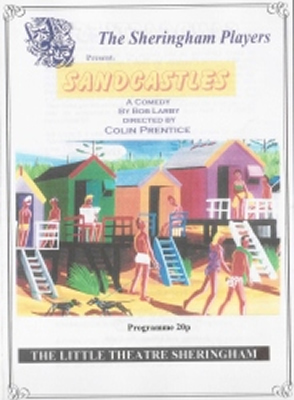 The Sheringham Players have chosen well for their latest production; this lively comedy, with its seaside setting and colourful mix of characters, will help banish those autumn blues.

Written by Bob Larbey (best known for TV hits such as The Good Life and A Fine Romance), it mocks pretension and blind conformity with sympathy and humour.  Two couples, 'posh' William and Margaret Patterson, and would-be posh Stan and Bernice Billet, are taking their regular holiday, with Stan's irascible mother and Bernice's lovelorn sister Pauline in tow.  Over the years the Pattersons and Billets have established rules of beach hut behaviour and stake out their own territory across the sand.

No sooner are the first teacups and deck chairs out, than their peaceful seclusion is interrupted by a succession of 'riff-raff' interlopers. Loudest of all are Doug and his two nubile nieces, who immediately ride roughshod over their petty conventions ("Are you an anarchist? asks Stan in alarm. "No, I'm in fish" replies Doug).  As their territory is eroded and norms are flouted, the culture clashes create comic chaos.

The Pattersons and the Billets are impressively played by Graham Blyth, Libby Henshaw, Neil Batchelor and June Cooper.  Bernice Escott as Stan's mother mines a rich scene of funny one-liners but it is Carl Denis as Doug and Alex Cheyney and Chloe Green as Debs and Becky who really steal this show, which was greatly enjoyed by the first night audience.