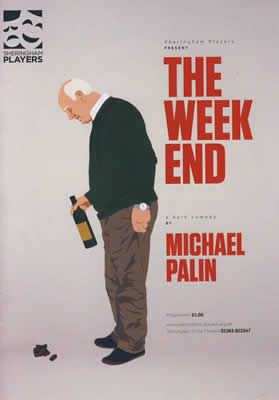 It says something about the Sheringham Players when it can stage a production that puts the mighty BBC's drama department to shame.

Back in 1994 when this play by Michael Palin was first staged, the expectation would have been for a zany, more surreal production based on his Monty Python pedigree.

Instead, we have a regular summer season comedy-drama with a decidedly dark thread. Of course, there are some Python elements – the incontinent dog, the bore-for-England human sat-nav, a hippy chiropodist - and, initially, it is played for laughs. But there is a bitter twist to this tale of family values.

Set in 1990s Suffolk, grumpy old man Stephen Febble is about to have his quiet life disrupted by a family gathering of misfits, which include all the above, as well as his long suffering wife Virginia, his daughter, precocious grand-daughter and a Marxist cleaning lady.

As the world-weary Febble, Graham Blyth manages to deliver his caustic one-liners deftly and is convincing as his exasperation mounts in equal measure to his intake of whisky. But he blossoms in the final act when the cause of his abusive, cantankerous nature is unexpectedly and dramatically revealed.

This is where Blyth and director Greg Pope showed the BBC how to do it. Instead of labouring the sarcasm as the recent BBC version did, they paced it with much more realistic and effective phrasing.

Ruth Elliott as Febble's wife Virginia, plays it straight, the perfect foil for all the sarcasm, yet sensitively portrays a deeply distressed woman and grows into the part confidently.

Glyn Sloman as the crashing bore son-in-law, and Angie Maddigan as the alleged lover of the chiropodist played by Tim Travers, kept the action moving briskly.

There is an obvious comparison with Sir Alan Ayckbourn to be drawn here, but where Ayckbourn knows when to stick the knife in, Palin hangs back just too long to make the dramatic point.

But the performance of the cast overcomes any niggling plot faults and the crew handles the many scene changes with alacrity.