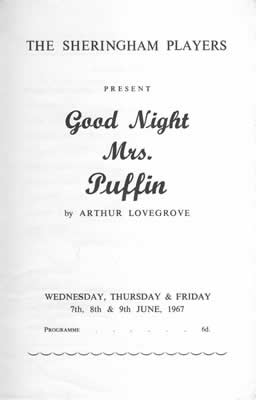 The Fordyces are busily preparing for the wedding of their eldest daughter Jacky to Victor, son of Stephen Parker, with whom Henry Fordyce is planning a business merger. Then in walks a total stranger, Mrs. Puffin, who announces she saw in a vision that Jacky would not marry Victor.

She then establishes her vision's accuracy by correctly predicting various hilarious domestic accidents. She also predicts Jacky will marry the young business associate, Roger Vincent, who has accompanied the Parkers to the Fordyce home.

She also foretells Victor will ask release from the engagement as he's in love with Jacky's younger sister. The oracle proves to be amazingly accurate - no wonder as she's been carefully primed for her role as suburban seeress.