By Jeremy Lloyd and David Croft 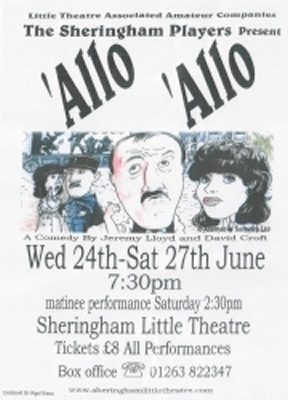 Good moaning.  And that's probably enough for anybody of a certain age to know exactly what's coming next.

Little point then in going over the plot of the popular TV cult comedy other than to say it involves sausages (the knockwurst variety), British Airmen, paintings of the Fallen Madonna with the Big Boobies, and exploding cheeses.

(But in case you've just landed from Mars, it's the one where Hitler is planning to visit and the cafe becomes filled with Hitler impersonators.)

The BBC1 sitcom ran for nine series over 10 years (1982-1992), so it's difficult watching the stage version without making comparisons with the TV original.  But why bother - it's pure seaside humour for all the family and you can see the cast just relish spouting the innuendo-packed smutty one-liners and catchphrases in their worst French or German accents.  Think what you can do with the word cockatoo - a wireless in this case, not a bird.

Graham Blyth is a brilliant Rene, the luckless cafe owner, and his wife "you stupid woman" Edith (Bernice Escott) hits all the wrong notes - beautifully.

And the double entendres just keep on coming, especially around the uber-camp Lt Gruber played by a gloriously mincing Nigel Manson.

So just sit back, think of France and imagine "whadda mistake-a to make!"