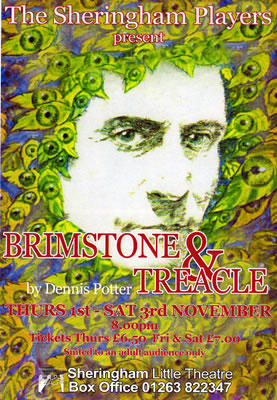 For an amateur group like Sheringham Players to tackle such a dark, difficult work takes guts, but courage is often rewarded.

The original 1970s version of this play was once described by a BBC executive as "brilliantly written and made, but nauseating" - the final word of the description coming as little surprise, considering some of Dennis Potter's other, perhaps better-known drama.

The BBC description goes some way to explaining how sinister this play is. The rape of a young woman in her own home who is in a vegetative state, carried out by a devious interloper who has wheedled his way into the lives of his victim and her parents, is the basis of the shocking narrative.

Joe Vanlint as Martin appears more cheeky public schoolboy than the horribly sly and furtive character (who may well be the devil in disguise) that is needed to create the necessary feeling of forboding. But imperceptibly the darkness descends and Martin, for all the politeness and well-coiffed hair, becomes unpleasantly and convincingly creepy.

The Potter style of layering comedy with quite unbelieveable degradation is carried over well by the amateur cast. A few first-night nerves early on in the piece perhaps, but well delivered on the intimate stage of Sheringham Little Theatre.

The build-up to the revealing climax was particularly well paced and all eyes were on Serena Cain as Pattie in the last few seconds as the defiled victim regains the power of speech to deliver the verbal coup de grace.