Once A Catholic: November 1994 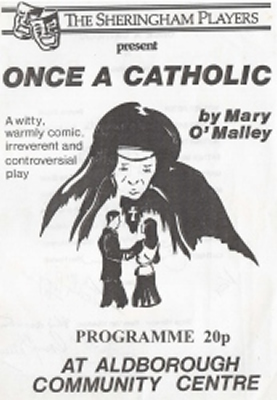 Slow pace for a play of wit and compassion.

Once a Catholic follows the education – practical, spiritual and sexual – of a group of convent schoolgirls in 1950s London.

It explores the tensions between secular pleasure and religious observation, teenage hormones and celibacy, with a sharp wit and a compensating compassion.

The problem with Mary O’Malley’s seminal play for Sheringham Players’ director Peggy Francis is its preponderance of short scenes, which can make for a rather disjointed evening.

She is further hampered by the tiny stage and technical limitations of this temporary venue. Some of the staging lacks imagination and the numerous scene changes get progressively slower.

The cast, on the whole, maintained a decent pace, and timed the gags well. The comic playing in the human reproductive lesson is first rate, as is Fr Mullarkey’s priestly talk on purity (superbly delivered by Graham Blyth), and Mary Mooney’s confession.

There are nicely differentiated performances from Julia Greef, Sally Parkinson and Esther Beckett as the Marys Mooney, McGinty and Gallagher.

The temptations of the flesh are greasily represented by Gramham Munday’s licentious bigot, Derek, and Ben Haslam’s worldly Cuthbert.

All in all, there is much to enjoy in this show, which has one more performance tonight.