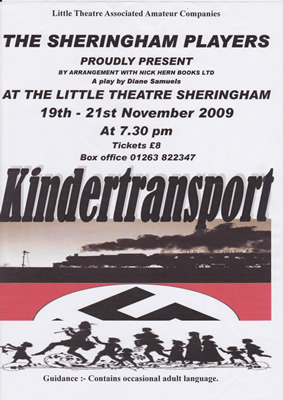 The most vivid story the play tells is about the "Kindertransport" itself - the evacuation of 10,000 Jewish children under 17 from Germany to England between 1938 (barely a month after Kristallnacht) and the declaration of war in 1939. Samuels tells this story through the case of 9-year-old Eva Schlesinger - a fictional composite of several surviving "kinder" whom Samuels interviewed - separated from her parents in Hamburg and taken in by Lil Miller in Manchester.

Eva's story is inherent drama of separation, train evacuations and channel crossings, the threat of further evacuation (from the bombarded British cities to the safer countryside), and the more profound drama of cultural and linguistic dislocation painfully combined with the loss of one family and the formation of another, with its attendant sense of betrayal and guilt

The second story is the relationship between the adult Eva, now Evelyn, and her adult daughter Faith. At the start of the play, Faith's relationship with Evelyn (a daughter unable to crack the shell of her mother's private fears) is cross-cut with the parallel story of young Eva's separation from her "Mutti" in Hamburg.

Faith, rummaging through the family attic, discovers the strongbox filled with letters and documents of Evelyn's secret Jewish origins, and her discoveries become the means for Samuels to dramatize Eva's story. Eva writes letters to her mother as Faith reads aloud letters from Mutti. Eva reads aloud from her favorite children's book, The Ratcatcher, while, on the other side of the stage, Faith struggles with the German of the book as she pulls it from her mother's strongbox.

The third story, which dominates the second half of the play, is much more dramatically profound. Here, the focus shifts to Evelyn, torn, as she was in youth, between her past identity and the new one she has forged for herself, between remembering and forgetting.