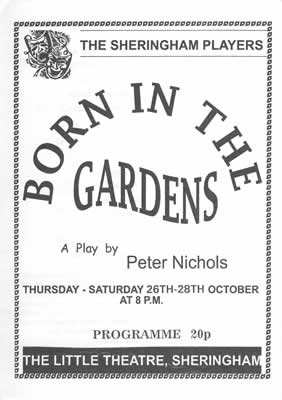 There is nothing like a wedding or a funeral for bringing families together, only to have them fall apart rapidly after the "do". Born in the Garden brings together the family of the late, but not too lamented, Victor, who made his fortune selling household brushes door-to-door.

He lies in state in the music room of Tudor Manor surrounded by his wife Maud, eldest son and local MP Hedley, twins Maurice and Queenie, a drum kit and shelves of antiquarian mucky books.

Maud, played to perfection by Susan Knights, is as daft as one of Victor's Kleensweep brushes. She watches TV with no sound so that she can chat to the presenters. Labour-saving gadgets only serve to make life very difficult for her, and her dottiness is slowly becoming dementia.

The family discuss what is to become of Maud and Tudor Manor, and in the course of that discussion they find more skeletons in their cupboards than Victor is likely to encounter in the graveyard.

Set in the 1970s, this Peter Nichols play touches on some of the political and social issues of the day. As in his better-known drama, A Day in the Death of Joe Egg, he explores deep and serious matters with gentle humour rather than pathos.

Although some of the references to race and immigration jar somewhat, it is surprising how many of the political concerns have taken a full circle to become topical again.

Nick Bird is relaxed in the part of Maurice, Maud's unconventional carer.

Angie Maddigan is excellent as his ever-loving sister with an untold secret, as is Alan Brodie as big brother Hedley. But Susan Knights steals the show, playing Maud as thought the part had been written for her.

The play was directed by a team and, unlike some committee productions, was sharp and effective. It was enhanced by the well-crafted scenery and lights and all done to the sweet and soothing sounds of New Orleans jazz. Sheringham Players have presented 95 plays since 1964, and this is another success to add to their list.