By Frank Dunlop and Jim Dale 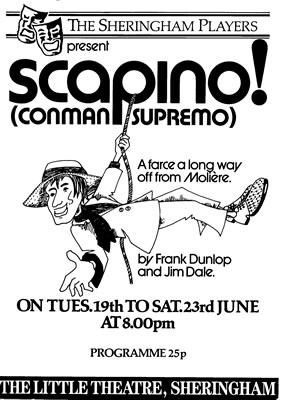 There is plenty of the scampering activity and knock-about humour demanded of a farce in Sheringham Players' production of "Scapino!" at the Little Theatre this week. Producer Peggy Francis has clearly put the football team sized cast through extensive training to create a highly-tuned performance.

Although there was plenty of appreciative laughter to show they were scoring a hit with many in the crowd, I have to admit that the Players missed the mark with me.

In the title role, Ben Britton worked himself into a real lather as he performed the antics of a colourful and energetic conman. In one frenetic scene, he was forced to impersonate, in turn, Long John Silver, a karate expert and a platoon of soldiers. But with this slightly odd-ball farce, I found such routines rather uneasy pantomime.

My favourite performer was Reg Lord, who was making his first appearance for the Players, and was a classically bombastic and hypocritical father.

Graham Blyth, as the bored, taciturn Italian head waiter, was also highly entertaining. A sea of tranquillity, he remained totally unmoved by the surrounding stormy seas. One Player who has often taken the limelight in pantomime, Gerald Fisher, almost had the audience hissing when he walked on stage. He was such a fine villain of the piece.

The production continues tonight and tomorrow at 8.