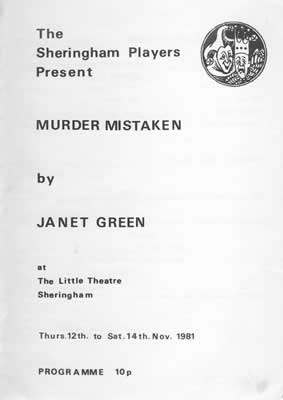 A misunderstanding over a will leads to a tragic blunder when a young man murders his wealthy older wife and then finds out he has not been left all her money.

It is the sort of plot which is the bread and butter of amateur drama and one which is gobbled up greedily by the Sheringham Players in Janet Green's "Murder Mistaken” at the Little Theatre, Sheringham, at the weekend.

Pauline Shewell, as the victim, Monica uses excellent expression of the voice and face to overcome restrictions caused by spending nearly all her time on stage in an easy chair.

Ned Seago plays her husband Edward, probably the most demanding role as it requires a shift in character from a confident con-man to a gibbering psychopath.

Emmie, Monica's naive and elderly maid, is well played by Dorothy Williams, who adds a little lightness and humour; Phillip Mortimer, the solicitor who indulges in verbal duelling with Edward, is played by Gerald Fisher, while Judy Nash is Charlotte Young, a wealthy young woman who looks like being Edward's next victim.

The play was produced by Peggy Francis.