The Great Escape - From A Residential Home: November 2016 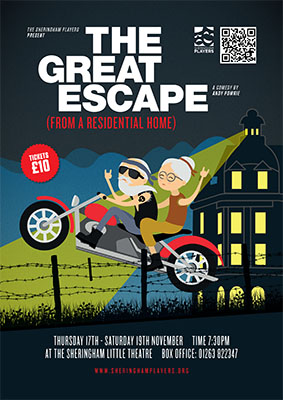 Sheringham Little Theatre was the venue for the Sheringham Players production of “The Great Escape - From a Residential Home”, an hilarious comedy with more than one thread linking it to the well-known film of a similar name. The plot revolves around two lively ladies who have had enough of the stifling life in the residential home and wish to break out.

In true Great Escape style, Ruth (Madeline Hudson) and Dorothy (Bernie Alexandrou), decide to try and dig their way out by way of a tunnel under the flower beds, their only tools being a pudding spoon each. Inevitably they are caught by the very pompous director of the home, Troy Stanwick (David Bull), a shady character indeed, assisted by nurse Phillis (Pauline Lingard), who is no Florence Nightingale.

The scenery was minimal but very effective and the use of props, a removal van which evolved into a Harley Davidson motorbike, was very clever and imaginative. After a failed attempt at escaping hidden in the laundry and Dotty coming under pressure from her greedy son Roland (Ben Turner) to sell her house, the two adventurous ladies finally escape dressed as nurses. When their disappearance is discovered a police search is put in motion and there are several very hilarious scenes as they meet other people on their way to live in Spain.

The highlight of the play was Ruth and Dotty’s meeting with the part time Hell’s Angel, Colin (Tom Denny), or Crusher as he likes to be known. What a comedy interlude they produced between them, the two ladies on the back of Crusher’s high speed Trike. It all ends happily, the ladies in Spain sipping cocktails, the greedy son and his wife without any of Dotty’s money and Colin with the lady of his dreams. Well done Sheringham Players on the most successful and enjoyable comedy play. We look forward to the next production.

Scroll down for videos, photos, cast and crew.