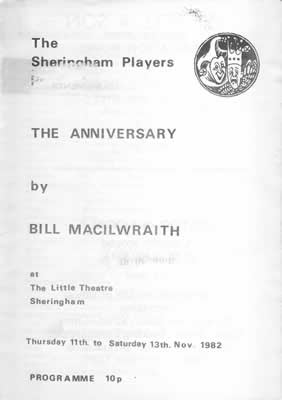 Players rise to the challenge

The Sheringham Players have grasped the nettle indeed with their newest production, Bill Macilwraith's "The Anniversary".

The powerful drama, black comedy and strong language of this modern masterpiece present a formidable challenge to any group of players.

For an amateur group, and especially one such as the Sheringham Players, which has tended to "play safe" in the past, its challenge is even greater.

The presentation at Sheringham Little Theatre certainly justified the gamble, with a very strong cast ably produced by Ned Seago - his first full length production winning over a largely elderly, audience on the first night.

The key to the whole play is the central character of Mum, and in Peggy Francis, Mr. Seago has shown some inspired casting. This very competent actress positively oozed venom in a superb performance as the evil matriarch.

But it still wouldn't have come off without equally strong support from the other five characters. In John Nash as Tom, Su Pointer as Shirley, David Bentley as Henry, Kees Van Woerkom as Terry and Joan Spall as Karen, Peggy Francis was given just such sup­port.