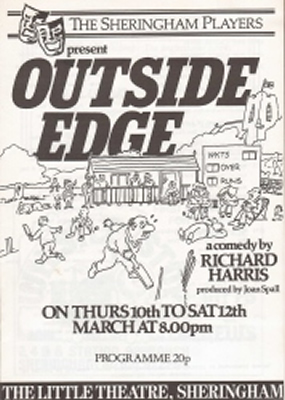 Bowled over by cricket laughs.

The late Bill Shankley, legendary manager of Liverpool Football Club, is said to have observed that football was not just a matter of life and death - it was more important.

Cricket has a similar significance for the hero of Richard Harris' comedy "Outside Edge".  Roger is captain of the village team and believes it is not the taking part which matters, but the winning.

Sheringham Players' production at the Little Theatre, Sheringham, last week, generally made the most of a superb script.

There were occasions, however, when the cast resembled an England bowling attack for lack of pace in delivering their lines.

Mike Thame, as Roger, turned in another competent performance, and Sandy Roper, as his long-suffering wife, caught the air of a woman who reveled in being put upon.

There was true drama when it was revealed that team member Bob had not been philandering as generally suspected.  Paul Clarke and Gill Stead carried off the moment very well.

Dennis, played by Kees Van Woerkom, was convincing as a spiv-like dealer with a heart of gold.

The relationship between Liz Williams, as a woman who loved nothing better than to knock up a few hundredweight of concrete, and Ben Britton, as a man who preferred to expend his energies preparing gourmet meals, brought the loudest laughter of the evening.

Nigel Harrison was suitable suave and smarmy as the young, go-getter solicitor, and Lesley Bates fitted the bill equally well as Sharon, his go-go dancer conquest.