A Chorus Of Disapproval: June 2001 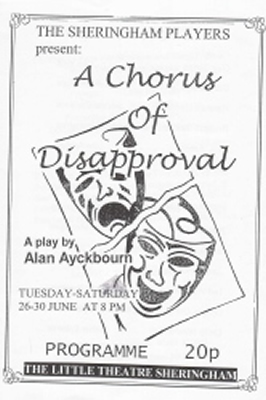 Duff notes and egos, limelight hogging and line-fluffing - surely Sheringham Players can do better than this?  Not when the action takes place in and out of the hilariously haphazard rehearsals of the Pendon Amateur light Operatic Society's production of Beggar's Opera.

It takes a good actor to play a bad one, and Sheringham Players do not strike a wrong note in this funny and heartwarming version of Alan Ayckbourns classic.

Graham Blyth's Dafydd Llewellyn is perfectly pitched and, as the society's eloquent windbag director, he imbues the part with all the egotism and pathos of the disappointed.

Nick Bird is convincing as the gullible and eager-to-please Guy, the newest member of the Society, whose passivity is the still centre around which all those petty rivalries, infidelities, fights and misunderstandings collide.

The comic timing is spot-on throughout, and that great British awkwardness, which Ayckbourn so likes to explore, is handled with an appreciation of its claustrophobic effects as much as its comic potential.

The scene where the innocent Guy spends the best part of an evening misunderstanding the intentions of a "swinging couple" is especially well played, as is the moment where Guy visits his director's freezing house and is privy to the discontent and loneliness to which Dafydd, in all his arrogance, is oblivious.

This is a painfully funny production, which finishes its run tomorrow.