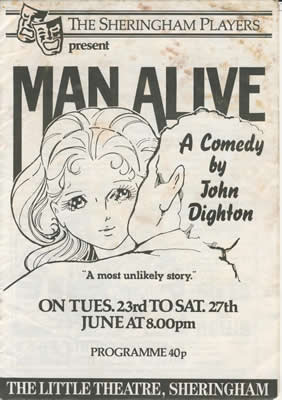 The story of a shop window dummy becoming flesh and blood is ripe for romance and comedy as the film Mannequin proved. Sheringham Players' production of John Dighton's Man Alive is just as entertaining.

In the stage version it is the man who comes to life, waxes lyrical and melts the hearts of the women he woos.

Tim Travers' arresting performance as Waldorf the dummy exploits the wide-eyed naivety of someone just born into a strange world. The pace of the plot and witty script that gel the play together take no prisoners, and - bar a few first night overlaps and forgotten lines - the chain of supporting characters has few weak links.

Mike Thame is excellent as the blustering store owner, whose January sales are disrupted by the mannequin charade. Sandy Roper is superb as dreamy Daphne the shop girl, as even her vivid imagination is surpassed by the turn of events.

Fellow dummies Belgravia (Rosemary Curtis) and Jubilee (Pauline Page) do not move a muscle all night. But the timing and wry delivery of their lines adds an extra dimension to the play, with their cruel observations on human life.

There are some neat cameo parts too — the best of them Elizabeth Williams as Miss Adshead, but Julie Thompson's pouting, hip-swinging portrayal of a sexy secretary seemed a little over the top at times.

Producer June Cooper seeks perfection. Though the opening night was a degree short of that, the play is hugely enjoyable. The show runs until Saturday.