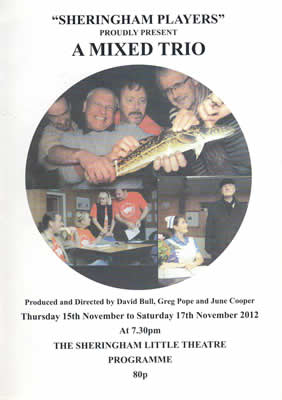 A Separate Peace by John Knowles

A sly, gentle dig at society's conventions and preconceptions. John Brown arrives at a country nursing home with a case of money expecting hotel-style service. He's a kind of dropout bound to puzzle a profession geared to treating the sick. He's not physically ill and apparently not mentally so. He settles into the routine and cocoon-like security. Everyone speculates as to his identity. Maggie, his favorite nurse, learns enough so they're able to locate his relatives who come for him. She feels guilty, but he says he doesn't blame her. He tells her it would have been right if he was really sick- and if he'd have wanted his relatives he would have found them.

A short play exploring the relationship between the upper and lower classes.

The Fat Lady Sings In Little Grimley by David Tristram

Gordon, Margaret, Joyce and Bernard tackle a threat to their performing survival - this time in the shape of a rival am-dram, newly-formed in their village, determined to upstage them with an award-winning musical. They pull together to devise an ingenious military-style plan that doesn't go quite to plan. When their subterfuge is discovered by the rival society's front-of-house manager, he's none too pleased. Add in a few emotional complications for Gordon, and things look a little grim for Little Grimley. Could this be the end of their society?