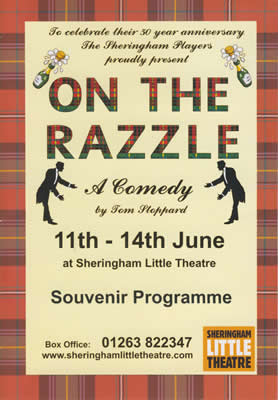 The opening night was played out to a full theatre in the 50th year since the formation of the company.

The story, set in 1880s Vienna, begins with Herr Zangler, played brilliantly by Graham Blyth, and his plans to marry Madam Knorr. Zangler find himself employing a servant Melchior, aptly played by Nick Jones. The two bounced off one another very well.

The story unfolds with Zangler leaving for Vienna, his two servants left in charge of the store. Played by Tim Travers and HJ Warrington, they decide to take themselves off on the razzle to Vienna. The duo were perfect comedy foil for each other. A highlight was the performance by Laura Williamson of Lisette the French maid. She was as saucy and coquettish as any French maid in a farce should be.

Stoppard’s farce is a free adaptation of a 19th century comedy that provided the plot for Hello, Dolly! via The Merchant of Yonkers, and The Matchmaker.

So its pedigree is already well-established but what Stoppard does is embellish it with his own brand of wit, tortured double-entendres and puns, thus preserving good, old-fashioned entertainment but with a modern - albeit 1980s - silliness.

Set in 1910, it tells how two grocery store assistants Christopher and Weinberl, played by H J Warrington and the excellent Tim Travers, decide to go “on the razzle” to Vienna while their boss, Herr Zangler, played with sublime understatement by Graham Blyth, is away – also in Vienna.

In one day they manage to go from humble shop workers to landed gentry to Don Juans.

The subsequent frantic frolics are exacerbated by the elopement of Zangler’s niece Marie (Chloe Annison) and her ne’er-do-well suitor, Sonders, a nicely fey Joe Burnham.

And the subsequent hidings and seekings and dressings up gives the cast – particularly the minor roles who often get the best laughs - a chance to show off their stage craft and comic delivery.

Mention must also be made of the fantastic costumes put together by head of wardrobe, Libby Henshaw.

In their 50th anniversary year, the Sheringham Players pull off this Viennese-inspired confection with style - as sharp and sweet as a Sacher torte.