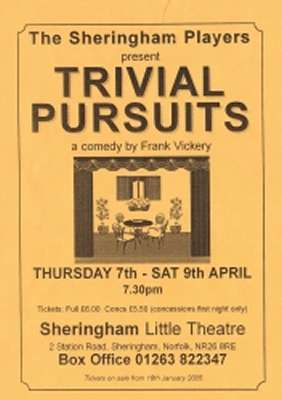 It's a summer evening, on a suburban patio, where the Coldecote Operatic Society meets for a barbecue and the announcement of its next production.

Anticipation of pleasure, you might think; the trouble is, certain members are vying for four different shows, trading threats, pleadings and sexual favours with the manager to ensure their choice prevails.

Into this bubbling pot stoops hangdog Derek, the "fully-fledged bore", who'll pledge his money to get the show he wants and the retun of his estranged wife.  Derek says of Diedre, "she'd been gone for a week before I knew she was missing".    And I was well into the play before I knew it was a comedy, but once it gets going, it's a lot of fun.

Frank Vickery, the Welsh writer of this play, has been described as the Alan Ayckbourn of the valleys; while I would hesitate to rate him with the Master, there are many fine observations of social foibles and fumblings, as well as moments of high humour and pathos.

Nigel Manson has done a great job in teasing out 10 different personalities, getting good performances from all, and moving the actors around a small set.

Graham Blyth as Derek is superb and brings tears to the eyes when he makes a hilariously botched attempt to tell a joke.

Alison Bonnington as Joyce plays a would-be star whore hopes are ruined by booze, and Greg Pope as Teddy nimbly switches from sweet to sour (with some very 'limp' jokes along the way).