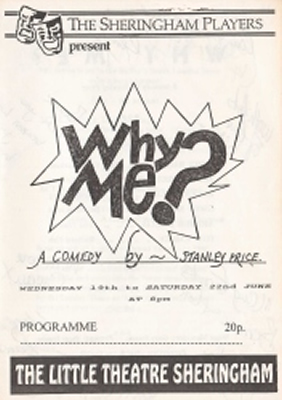 Shafts of brilliant script fail to light up tarnished comedy.

Why me? The name of the play and the plea of the reviewer.

A black comedy. Some shafts of brilliant witty script. But mostly set in a grey sea of patchy production and performance.

When the comedy by Stanley Price was on song between the six-strong cast it fizzed with quickfire humour and satirical observation drawn from a potentially unfunny plot of a businessman's plight after losing his job.

But those jewels were too far apart in a tarnished chain of missed cues and forgotten lines.

Credit to Susan Knights, whose cameo role as the dotty mother-in-law was as delightful as some of her down-to-earth comments on the chaos unravelling around her mundane world of radio phone-ins.

The action revolves around his difficult relationship with a successful businesswoman wife (Sally Strong) and affair with bored housewife neighbour (Bernice Escott).