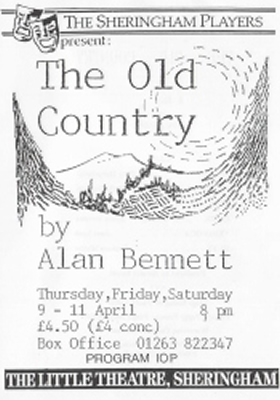 Nothing could be more English: a garden, bird song and Elgar in the background. So starts Alan Bennett's play. But all is not what it seems. Why does the owner of the house have a pistol in his drawer? Who are the strange young couple who come to visit? Where actually are we? Alan Bennett's love of the mystery story lies behind the unravelling of these clues.

In this demanding play about loyalty and treachery much depends on firm characterisation and on tone and undertone. Director Bernice Escott conjured some fine performances from the Sheringham Players in her thoughtful production.

At the centre of the plot is a defector and his wife (well played by Tony Hargreaves and Sheila Roberts). Sheila Roberts brought a note of real sadness into this funny and poignant play. Graham Blythe as the epitome of the Establishment, an Anthony Blunt figure, gave a performance of detail and conviction: his response to an allegation of homosexuality from Eric (Tim Travers) was an electric moment. Joan Spall, as his wife, was totally convincing in her role. A nicely dowdy atmospheric set heped to underline the action.

The shifts in mood needed a little more underlining as sometimes the pace lacked variety, but this was a thoughtful production, thoughtfully acted and directed throughout. It will stay in memory.