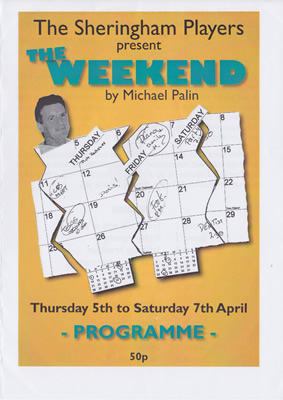 Written in 1994, The Weekend (set in Suffolk, the present) has been described as a 'riot of a comedy with an ever-present dark side'.

Cantankerous, world-weary and generally grumpy... think of an adjective synonymous with 'crabby' and it will apply to Stephen Febble. All he wants is a quiet life but, to his horror, his long-suffering wife Virginia fills the house with guests for the weekend.

Not only do his daughter, gormless son-in-law, precocious grand-daughter and incontinent dog arrive, but his best friend, his wife and her smooth chiropodist lover turn up for dinner. In turn exasperated, frustrated and irritated, Stephen responds in his normal fashion - reaching for the whisky (in large amounts) and for the sarcasm (in even larger amounts).

Despite this, though (or perhaps because of it), there's lots of laughter and writer Michael Palin has given us lots to laugh at. But it's also a play with more than a thread of black as well as light humour, and a play with surprising revelations of emotion, as well as farce. In short, if you want straight comedic entertainment, it's there in buckets, but there's also a poignancy that gives the script much depth.

As Stephen says, 'Murky pasts darling? What about our murky presents, eh?'