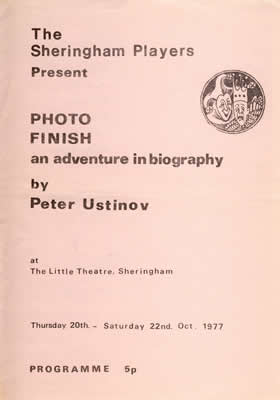 At the age of 80 Sam is the victim of a shrewish wife, Stella, who he has quarreled with for 60 years. One night he receives a strange visitor, an immaculately dressed man of 60, who opens a drawer to which only Sam has the key and withdraws a valuable necklace, which Sam gave to a lady of easy virtue (but expensive access) 20 years earlier.

No sooner do Sam and the mysterious stranger discover that they are the same man, than another interloper appears, Sam at 40, followed by Sam at 20. Valiantly the octogenarian tries to keep the others from making the mistakes he has made, but his efforts are futile. Each Sam proceeds to make the identical missteps; marrying Stella at 20, not leaving her at 40, becoming hopelessly infatuated with another woman at 60.

To join this foursome comes their father, an irascible Victorian with a lecherous leaning toward a secretary who looks suspiciously like the lady of the necklace. In the end there is still another Sam, A newborn babe whom Old Sam holds for an instant, then hastily rejects.