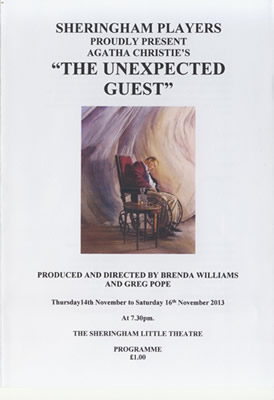 A classic Agatha Christie thriller, this play has the potential to slide easily into the cliché drawing room whodunnit with diverting contrivances like the mandatory French windows, creepy servants and long, explanatory monologues.

But this adaptation by the Sheringham Players gripped the concentration from the moment we saw a stranger - the unexpected guest - who has blundered into a murder scene and confronts a body and the dead man's wife standing over him with a gun.

Tim Travers, in the leading role of Starkwedder, the stranger, relishes the part but rather underplays it.

Hazel Warrington grows into the role of calm and collected wife of the deceased and David Bull as the poetic Welsh police Sergeant provides the light relief.

Everyone is a suspect in this multi-layered plot and the cast succesfully maintain a tight momentum.

But it is Nick Jones, the youngest cast member and making his debut, who takes the plaudits for his increasingly chilling portrayal of the victim's mentally disabled half-brother Jan Warwick.

Scroll down for radio interview, photos, cast and crew.