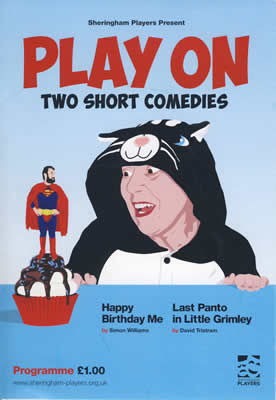 'Happy Birthday Me' by Simon Williams

"It's my birthday. All I wanted was a bottle of Claret and a couple of winners at Sandown." Instead, retired actress Margot Buchanan receives three separate visitors: her ex-husband Leo, an ageing film star fresh from a punch-up with a reporter, Leo's current wife Judy, and his latest mistress Sadie, an aspiring Juliet seeking Margot's acting advice. Just as the inevitable fireworks kick off, Leo suffers a fatal heart attack. Then the kissogram shows up...

In memory of Brenda Williams, a stalwart of Sheringham Players, who had so much fun playing 'Joyce' in The Fat Lady Sings in Little Grimley.

Set in Little Grimley Village Hall, late 1980s. The tour de force that is the Little Grimley Amateur Dramatic Society have another meeting to discuss their talent, their notable recent success (or should that be not able?) and their hopes for achieving new highs with their next production. Watch in awe as they ease through a rehearsal and then peak with a performance like no other.