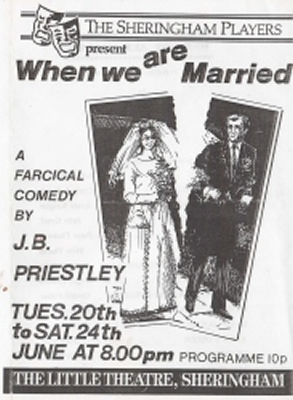 Some plays have a sting in their tail. This one has them top to toe, like a cactus.

And, like a cactus, it is a little hard to pick up at times, because the plot thickens faster than quick drying cement – and can leave the audience a little leaden-footed as they try to wade through it.

Once inside, the twists of story and turns of phrase are at times succulent.

To tell the story would take too long, and would spoil the surprises. But it revolves around a couple who invite their pen friends to visit – but with more than just friendship in mind.

There are some oases of strong characterisation by The Sheringham Players, with Roger Tuck convincingly caddish as silver-tongued charmer Ted, and Derek Bull springs in spryly as a surprise late character, Bill.

But at other times the cast falls a little short on projection, confidence and timing essential to keep the warp and weft of the mazy plot together. The “light comedy” billed in the programme is at times entertaining, but at times heavy going.

To use an in-joke from the play itself, it seemed in need of a vital spark to make it burn more evenly from start to finish.