The Killing of Sister George: April 2009 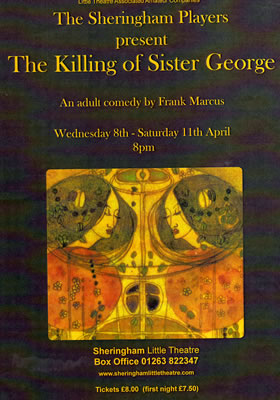 Sister George is a beloved character in the popular radio series Applehurst, a nurse who ministers to the medical needs and personal problems of the local villagers. She is played by June Buckridge, who in real life is a gin-guzzling, cigar-chomping, slightly sadistic masculine woman, the antithesis of the sweet character she plays. She is often called George in real life, and lives with Alice "Childie" McNaught, a younger dimwitted woman she often verbally and sometimes physically abuses.

When George discovers that her character is scheduled to be killed off, she becomes increasingly impossible to work and live with. Mercy Croft, an executive at the radio station, intercedes in her professional and personal lives, supposedly to help, but she actually has an agenda of her own.