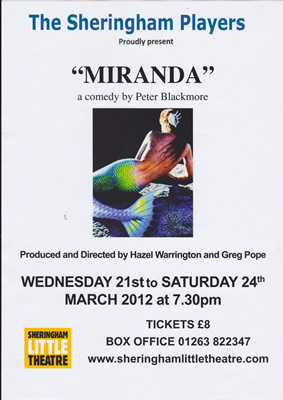 As fisherman's tales (or should that be tails) go, this is definitely the one that didn't get away.

On a solo fishing holiday in Cornwall, society doctor Sir Peter Marten is himself reeled in... by a Mermaid. It seems she's been angling to visit the surface, and insists the she take her home with him to London.

By pretending Miranda is an invalid in a wheelchair,which conveniently provides a way to cover that fishy appendage, the good doctor now has to contend with his suspicious wife. Miranda's siren song also attracts butler Charles (Tim Travers) and the doctor's friend Nigel (Matt Warrington).

A slightly dated comedy-fantasy by Peter Blackmore, this genteel play could have descended into a ribald "Carry On" but the risqué elements are handled discreetly. However, the women do suspect "something fishy", especially when the laundry maid reports that Miranda never wears knickers.

Suzanne Challinor is delightful as the flirty mermaid and Greg Pope plays the perfectly proper doctor with just enough of the naughty boy about him while Helen Simmons turns in a sterling performance as his snooty wife. But as ever, it is the non-lead part of the eccentric nurse, played by Bernice Escott which gets the best of the laughs.

Catch this if you can - you'll be hooked too.