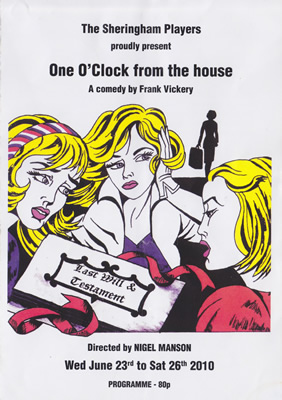 It's a funeral, a sombre occasion and the family gathers to pay its repects to a recently deceased father. Filial "grief" fills the room.

Cue laughter. For this dysfunctional group include a wellington-clad cook who bakes almondless almond cakes, a relative who brings a shopping trolley called Rover and a sister who's a happy inmate of a psychiatric home. What must poor old dad have gone through? It's little wonder, then, that the old boy managed to have the last laugh - with a posthumous joke on three of his daughters.

This is a large cast, with seven women and five men, so enough characters to give each player a satisfying role.

Carol Squires covers the happy inmate with a delightful quirkiness while David Starling as beleagured husband Austin and Greg Pope as the wellie-booted Tudor, play it with well-timed understatement. There were fun cameos too from Brenda Williams, Stuart MacInnes and Nick Bird. Welsh playright Frank Vickery is known for his unique black humour and trademark one-liners and this play, directed by Nigel Manson, is considered on of his most famous comedies. But you don't need to be Welsh to enjoy it.