By Philip King and Anthony Armstrong 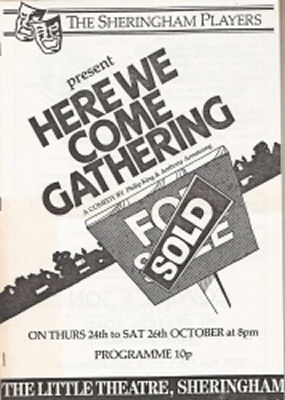 Moving house is never easy and the Sheringham Players really managed to make a meal of it last night, much to the audience's delight at the town's Little Theatre.

Take a bossy mother-in-law, a dotty vicar, a pompous husband, his theatrical wife and her former Romeo and you have the ingredients for hilarious chaos.

That is just what ensued as this fruity combination of characters made smart work of Philip King and Anthony Armstrong's nutty comedy "Here We Come Gathering".

Peggy Francis was superb as the archetypal battleaxe of a mother-in-law determined to take charge.

John Peacock as her henpecked husband beautifully mistimed his every entrance to great effect.  And Sue and Gerald Fisher played the harassed couple saddled with "mother" and stranded in a madhouse with no food of furniture.

Some lovely visual humour was added by Mike Thame as the removal man, frantically trying to save his injured ankle from the ministrations of mother-in-law.

This production by Duncan MacMillan was highly entertaining.

John Meikle's set was well-designed and the lighting was crisp.