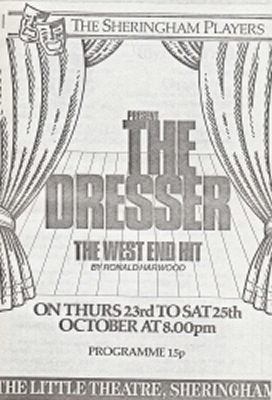 The tragi-comic sweat and strain of theatrical life is splendidly staged by the Sheringham Players in their latest production, "The Dresser."

Ronald Harwood's finely-tuned play about the complex relationship between a tyrannical actor-manager and his fastidious dresser is a difficult piece to perform.

The bitter sweet backstage drama is set in a dingy World War Two theatre during a performance of King Lear.  At the centre of it all is Norman, the mincing and steadfast dresser who cajoles and coaxes Sir on to the stage.

Ronald Harwood's wordy play is a homage to the rich tradition of the theatre and would be ambitious for any company.  The Players make the drama work, thanks largely to fine performances from Mike Thame as Norman, and Peter Castle, as Sir.

Both performances were pitched just about right.  Norman showed the right degree of effeminate efficiency and human frailty while Sir was comic, selfish and outrageous.

The first act started a little flatly but like the ailing actor, Sir, picks up as the characters prepare to put on King Lear.

By the interval and through the second half the laughter is flowing.  But beneath the lighter moments there is a strong undercurrent of tragedy as the audience watches the final throes of a burnt-out actor driven by ambition and aspiration.

At times this side of the play was lost on parts of the audience.  On the opening night it was rather disconcerting to hear laughter during the final, pathetic scene.

The dowdy wartime sets evoke the provincial theatre of the forties very well and the scene changes were on the whole quite slick.