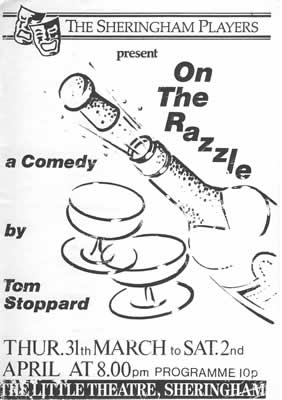 Stoppard’s farce is a free adaptation of a 19th century comedy that provided the plot for Hello, Dolly! via The Merchant of Yonkers, and The Matchmaker.

So its pedigree is already well-established but what Stoppard does is embellish it with his own brand of wit, tortured double-entendres and puns, thus preserving good, old-fashioned entertainment but with a modern - albeit 1980s - silliness.

Set in 1910, it tells how two grocery store assistants, Christopher and Weinberl, decide to go “on the razzle” to Vienna while their boss, Herr Zangler, is away – also in Vienna.

In one day they manage to go from humble shop workers to landed gentry to Don Juans. The subsequent frantic frolics are exacerbated by the elopement of Zangler’s niece Marie and her ne’er-do-well suitor, Sonders.