By Duncan Geenwood and Derek Parkes 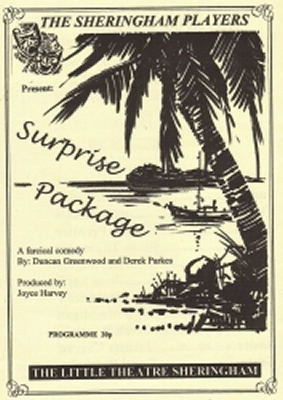 Wish you were here? You should.

Hotel has dodgy plumbing.  Weather stormy.  Residents up to all sorts of hanky panky.

Sheringham Players' summer farce is a holiday island romp which sends waves of laughter through the seaside audience.

A strong cast unpacks a suitcase of powerful oddball characters, slick action, and good gags into a plot which brings two northern families together at the Pension Maria.

It is a cross between Fawlty towers and Holidays from Hell as anything which can go wrong, does go wrong.

Special mention should go to Colin Prentice, who was superb as the long-suffering Alfred "I wish we'd gone to Blackpool" - Tinsley - stepping into the role at only two weeks' notice.

He is the hub of the action as his son, Ron (Simon Thompson) tries to patch things up with his ex-fiancée Gloria (Sarah Westlake).  she is handicapped by the presence of her mother, Mildred (Angie Maddigan).

Add in Alfred's battleaxe wife Nora (Susan Knights), and grouchy grandma (Joan Spall) and the play, produced by Joyce Harvey, is a good evening's entertainment to get you in the summer mood.