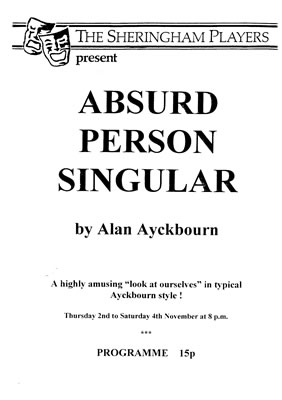 Farce with a strong black streak

In the Alan Ayckbourn comedy, Absurd Person Singular at the Little Theatre, Sheringham, each act is set at Christmas time in the kitchen of each of the three couples who make up the cast.

Often hilarious, the play is a typical Ayckbourn portrayal of suburban and middle class life. The Sheringham Players capitalised on the opportunity to exploit their foibles. The unlettered social climber Sidney Hopcroft and his house proud wife Jane, prosper from humble beginnings running a general store. The play examines the reactions to the success of their associates - bank manager Ronald and his wife Marion and architect Geoffrey and his neurotic wife Eva.

Paul Clarke portrays Sidney as something of a buffoon and raises many laughs. One has the impression of a caricature of the late Benny Hill, whom he resembles, which detracts slightly from his credibility, whereas Paula Brock as the feather brained Jane is more believable.

David Long and Joan Spall are thoroughly convincing as Ronald and Marion, whose domestic misery is revealed in the last act.

The play borders on farce but with a strong streak of black comedy in act two where Eva seeks various ways of taking her life, unbeknown to the helpful Sidney who draws a diagram of the plumbing on the back of her suicide note!

The producer was Peggy Francis.