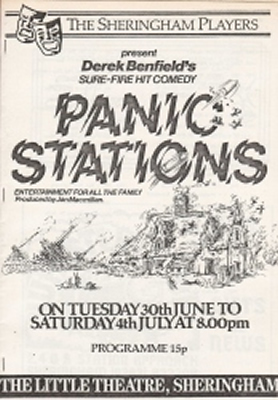 Confusion was heaped upon lies and eccentricity to provide a laugh a minute in Sheringham Players "Panic Stations" at the Little Theatre.

Derek Banfield's play was billed as "a sure fire hit comedy". In fact the complicated and at times over-contrived plot demanded slick delivery from the cast to ensure that the lines and the laughter flowed.

The Players' opening night success was, I felt, evidence of hard work at rehearsals. Quick-fire interchanges were delivered with hardly a pause and the whole cast looked composed and confident.

Michael Thame as Chester Dreadnought sailed inexorably through the stormy seas whipped up by his indiscretions and lies.

John Meikle, playing Abel Bounty - the simple country soul involuntarily caught up in the mysterious goings on - was excellent, while Joan Spall as Mrs Bounty was the best performance of the night for my money.

Carol, the dizzy blonde, was particularly well-played in the early stages by Sandy Roper, but she seemed to run out of steam as the action moved on.

Joyce Harvey, as the deceived wife, should have raged more at her husband's antics to have been entirely convincing. Even with a shotgun in her hand, I never believed she was ready to shoot the philandering Chester.

Peggy Francis deserved particular credit for not over-playing the harridan mother-in-law stereotype as Lady Elrood. Duncan McMillan, on the other hand, did not quite give the eccentricity of Lord Elrood the gusto I felt it needed.

Hilary Nelson was perfectly dotty as the hyped-up amateur historian Miss Partridge. Barnstorming Sergeant Everest, played by Neil Batchelor, I felt lacked a bit of bark and snap, but was still a hoot.