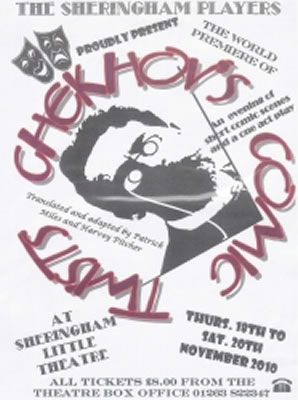 It is not often that one is treated to a world premiere, but that is what was in store for the audience who saw 'Chekhov's comic Twists', a series of sketches and a one-act play performed for the first time in English. Putting on a performance of a sample of Chekhov's comic works was a brave undertaking, but the humour and the age of the original material stood up well thanks to the sensitive and quietly witty translation by Patrick Miles, responsible for the one-act Vaudeville and best-known piece 'The Bear', and Harvey Pitcher, for whom the conversion from Russian and the writing of the linking narrative was clearly a labour of love. Some of the material in the original form was described by Pitcher as 'quite salacious'; however clever writing, crisp direction by Bernice Escott and convincing physical performances by the cast avoided the content descending into smut. Each had a moral point to make within it, somewhat like Struwwelpeter without the cruelty.

The cast ensured that a steady smatter of laughter came from the auditorium, the punchiness drawing warm applause even though the plot of 'The Swedish Match' was easy to work out and the twist at the end of 'The Objet d'art' could be seen coming a mile off. David Starling, as Chekhov, had the duties of narrator in between sketches, providing a cerebral and ironic commentary; his continuous presence at the right hand corner of the stage not distracting from the other performers in any way. The sets by Kees Van Woerkom and his team had been well thought out; enough to set the scene without overpowering, thereby throwing the spotlight firmly on to the actors and the dialogue.

There were some strong performances from the cast to be enjoyed. James Sadler's over-eager gift bearer, subtly camp barber and zealous young police officer being excellently acted. There was very convincing interaction in 'The Bear' between David Bull's delightfully indignant Smirnoff, despite a touch of first-night nerves, and Hazel Randall's hilariously overblown grieving widow. Matthew Warrington's vocal performances and facial acting were notable, bringing out his characters well, particularly as one sketch confined him to a steel bath for the duration. Charlotte Richmond struck a neat balance between winsomeness and naughtiness as the Young Maiden, with Johanna Kirk suitably coquettish as a dacha 'Landlady'. Tim Travers' performance as a bungling detective drew much laughter, as his facial expressions while trapped in a chair wearing only a towel as a nervous barbers' victim drew even more. John Meikle took on the more elderly roles, being funnily doddery without being hammy.

Overall, a well written, well acted offering on a suitably Spartan set, and a credit to all involved.