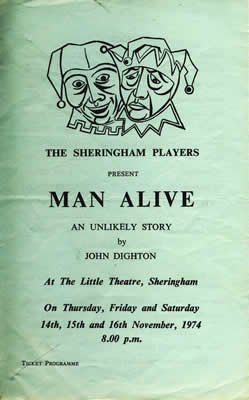 Unlikely story of a dummy

The stage of the Little Theatre, Sheringham, became the window of a department store last night for the Shering­ham Players' production of "Man Alive," by John Dighton.

The play, described as an unlikely story, surrounded the incarnation of a male dummy, and the manner in which he changed the store and the lives of the employees and employer.

The players strove to retain the credibility of a difficult play. Un­fortunately, the final act degenerated into rather childish humour, but this was the play's fault and not the cast's.

The outstanding performance of the evening came from June Cooper as the upper class dummy, Belgravia. She achieved the distinction of not moving an inch except when being humped about the stage manually. Her deadpan expression was kept almost to perfection.

Peter Seago, as Waldorf, the living dummy, added humour to the scene and was backed up by good character acting from Sandy Roper, as Daphne, and Pauline Page as Jubilee.

This was certainly a comedy with a difference - at times very funny but at others dull. It continues tonight and tomorrow.