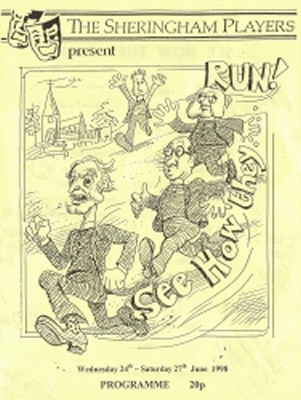 Show is still fit to run after over 50 years.

One might have expected that a farce written over 50 years ago and set in world war two at the time of the Nazi invasion scare, could have dated.

But thanks to the skill of the author, Philip King, and the brilliant timing of the company, directed by Colin Prentice, it revived remarkably well and raised many a laugh.

Plays concerning comic parsons, especially when one of them spends much of the action in his underpants, are part and parcel of traditional English farce. This one involved not only two vicars and a bishop, but two further characters masquerading as men of the cloth.

Stock farcical characters in stock farcical situations - the humorous maid, the pernickety spinster who gets drunk on communion sherry, the none-too-bright but stentorian Army sergeant - are exploited to the full.

Graham Blythe as L/Cpl Clive Winton, Penelope's former boyfriend and thespian, and the diminutive Nigel Manson as a visiting cleric, the Rev Mr Humphrey, add hugely to the fun of mistaken identities.

Derek Bull as Sgt Towers conducted the interrogation of the assembled gathering of parsons with barrack-room precision.

The intruder was played by Kees Van Woerkom, who designed the attractive set.