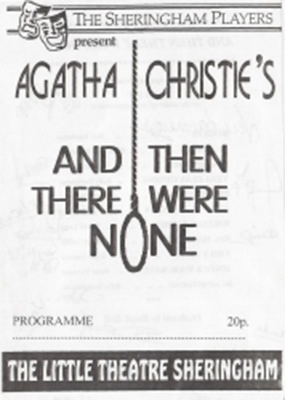 Agatha Christie still pulls a crowd. It was a full house at Sheringham Little Theatre for Derek Bull’s production of And Then There Were None!

Sheringham Players played it with gusto, and even raised a few laughs from the Thirties dialogue, while maintaining the tension as the cast were bumped off one-by-one.

The actors worked well together and individually and we could see the middle-class upper lips getting less and less stiff as their numbers thinned and the plot thickened.

Peter Thrower was wonderfully cast as Judge Wargrave and acted himself into a frenzy and David Long’s clueless copper provided much of the casual comedy.

This was Derek Bull’s first production and he should be well pleased with his staging of Agatha’s cleverest whodunit.

It says a lot for his direction and the splendid set that he had 10 actors moving around Sheringham’s small stage without it getting crowded. But he’s still pondering the real mystery of the play – why did the pistol refuse to fire on all three nights?

It didn’t matter too much. We were all too caught up in the action for it to spoil an excellent production for us.