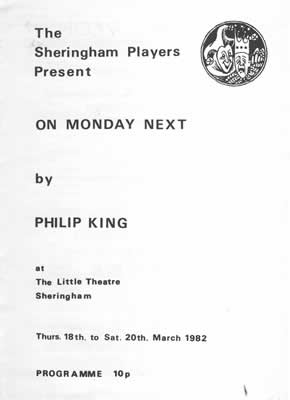 It is perhaps fitting that for their 40th production Sheringham Players have chosen a play which provides a pithy insight into theatrical life.

Philip King's "On Monday Next," which the Players presented at Sheringham Little Theatre last night provides a warts-and-all look at weekly repertory, which must also ring true in its bitingly satirical way with anyone who has ever had anything to do with amateur dramatics.

The unconventional format of the play - eavesdropping on a second rehearsal with the "producer" addressing the live audience direct - caught some of the first night patrons of the Little Theatre on the hop, producing at times a conflict between King's witty prose on the one hand and the very loud off-stage whispers from some of the more perplexed members of the audience on the other.

But a seasoned cast, led by Players' chairman John Meikle in the role of the producer, rose above such unexpected turns of events to give a first-class overall performance of a very difficult work.

There seemed not a weak link in the entire production - even down to the lighting cues, which were right on the button every time (well done John Avery).

If any are to be singled out then it should be Meikle, for his tour de force in the principal role, Joan Spoil in the tragi-comic pan of Sandra Layton, Gerald Fisher as her drunken stage husband Norwood Beverley and his real-life wife Sue Fisher as the bubbly Daphne Wray.

Mike Thame brought his usual sure touch to the silly ass role of Jerry Winterton and there were also some nicely-judged performances from Paddy Cordon, Edna Jenkins, George Edwards, Gilly Baker, Mike Crowe and Karen Hammond.

John Nash, who with Gary Linder and Bertie Cooper "walked on" a couple of times, produced with a deft hand and, together with the rest of the company, should be congratulated on a first-rate effort. Further performances are scheduled for tonight and tomorrow.